So it seems that Ian Duncan Smith now wants to change ESA to see if ill and disabled people could work a few hours a week:

​But who will employ people for a few hours a week?

Well they could have special factories where people could work for the time they are capable of working… and earn a wage & feel part of a community.

But wait a minute… didn’t those factories exist before? Yes, they were called Remploy and were hugely successful.

This government closed them down 4 years ago… pushing hundreds of disabled, mentally ill people and learning disabled people out of jobs that they loved!

He makes me sick to my stomach.

I’m desperately trying to put that excuse for a human out of range. How much longer can he go on with such wholesale bigotry and hypocrisy?

After being left on the academic scrap heap thirty seven years ago, I have struggled against circumstance and prejudice in my quest to build some sort of career, only to be met with the beast of MS. Now it seems I’m at the disposal of an upper class minikin with the brain power of a small pebble. Along with his toff cronies, he has chipped away at the foundation of our society resulting in fewer services, longer waiting times and unreasonable expectations.

If only I had the button-he’d be the first.

Taken from the Guardian today. 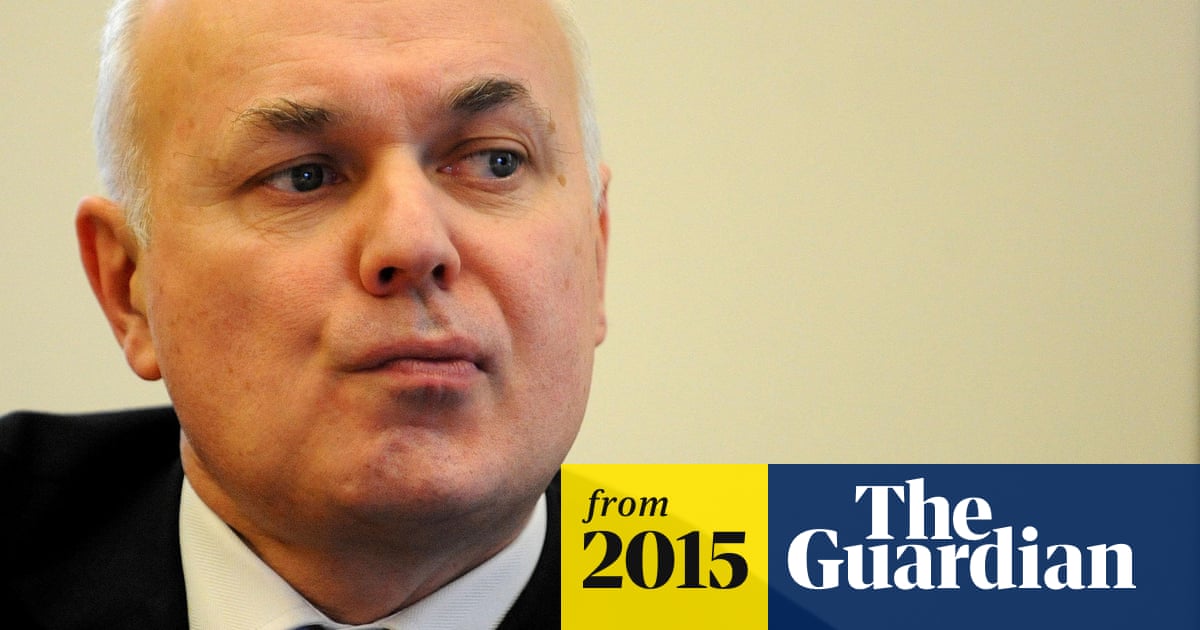 Government wants radical reform to push 1m more people into work, but disability campaigners fear they are being targeted

"Statistics showing how many people die while claiming out-of-work disability benefits will be published on Thursday. The information commissioner overruled attempts to withhold the statistics, originally requested by a campaigner using freedom of information laws. The DWP said it had always intended to publish them.

In April, the commissioner asked the DWP to publish the number of claimants of incapacity benefit and employment and support allowance who had died between November 2011 and May 2014. The initial freedom of information request was sparked by concerns that disabled people were being declared fit for work, having their benefits stopped, and then dying. The prime minister, David Cameron, promised in June to publish the figures".

Perhaps the figures were not high enough for Tory tastes, so IDS decided to up his game.

That excuse for a man and his Tory cronies make me so angry, I’d like to see him try and work with MS, he would soon change his mind.

Who on earth voted these morons in…I for one didn’t.

me neither Pam… it makes me so angry,it really does, i cant put on here just what i think,i would be banned

It’s Tory bashing time again. Yawn. Waste of space yes, but Labour did such a good job too… People have short memories. Seems they’re all a bunch of twats. Their colours are irrelevant. They attack the easy targets, the quiet voices who don’t/can’t object. Politicians are like nappies, and should be replaced regularly for the same reasons.

i agree there all as bad as each other.

As a still working Civil Servant with MS I think I can compare the bl@@dy Tories to Labour, for all the low increases during New Labour (Not Quite So Tory Tories) at least they didn’t make changes to law within weeks of getting in on their unelected coalition. The changes to the Superannuation Act have allowed that and this Government to do what they please for the last five years, and now on for another five years. Sod worker rights, they’ve merrily slashed our terms and conditions as they’ve seen fit. And used the media to hit those who are most vulnerable, whilst filling theirs and their mates pockets.

What??? A politician lining his and his friends pockets ??? Rich getting rich and the poor getting poorer ??? Next you’re going to tell me that some tell fibs ???

Well rather than changing politicians like nappies the people should look to getting these expublic schoolboys out of power and put some real people in charge.

Having just sorted themselves with a starting salary of £75k, and that’s they’re first year as an MP. They still get progression pay annually, so get a £2k-£8k increase each year and then get whatever yearly increase, which of course this year was 11% when everybody else is on 1%! They get ‘awards’ for being on certain committees, often between £10-30k a year. And some cabinet Ministers get fully staffed (including stables) taxpayer/National Trust stately home manor house to ‘entertain’. And not forgetting the, mainly unreceipted, benefits package worth £250k a year (how many of the provided 4 PCs and 2 printers plus consumables are going to friends and family when the parliamentary and constituent offices are equipped under government contracts?) for each MP.

And yet it’s the vulnerable who are bringing the economy down! What? Austerity, Trickle Down Economies, quanitive easing, that after five years hasn’t reduced the deficit, it’s still increasing. The last 8 years has been the biggest transfer of wealth from the poor to the rich, and all you can say is don’t blame the Tories, that last lot didn’t do any better…because they were the same greedy Thatcherite/Blairite/Theives that got us here. Time the people said enough.

Wonder how I would have got to work today? Been in bed all day fighting an infection, maybe a lorry with a crane would collect those of us who are bed bound.

Never mind Corbyn will sort it all out. Come the revolution we will all be equal.

Indeed Don… I’m wondering the same. Have been in bed all day. Feel very weak and wobbly. So how exactly would I have got to work today?

Actually how exactly could I have even got ready to go to work today? Having a shower and getting dressed are not in the realm of possibilities!

H of C. Same shit different gov. I have no loyalties for any party. They’re all a bunch of liars, and all in it for themselves. Equal ? Some more equal than others…

Labour may be far from perfect, but they are always significantly better than Old Etonian rule.

Yup, washed, half dressed, sleeping on the sofa, no shower for me, as I just couldn’t manage it all and still get to work. If my colleagues just knew how much I have to sacrifice to keep working, yet I have bosses who just don’t give me an inch. I still get thrown 40 core objectives a year when most achieve about 10. Well OK they manage a couple more and then get a bonus for exceeding, which does grate that I’ve done so much more, and dealing with so much they don’t see, and yet I just get a ‘Met’ each year.

I’d like to stop, but I need to keep going for my five year old daughter, and a girlfriend, who was made redundant from an HR role at the Met Office, and can’t find anything but ‘minimum wage’ zero hours work. And how are we supposed to exist on that? Welcome to modern Britain.

Very true Whammel… and let’s face it, even previous Tory governments have had more heart than this lot.

However much we hated Thatcher, DLA actually came into being when she was PM.

This lot are the most heartless government this country has ever had.

The figures are out and they make grim reading. How on earth this national disgrace can be tolerated is beyond me and wonder how IDS will spin this one. 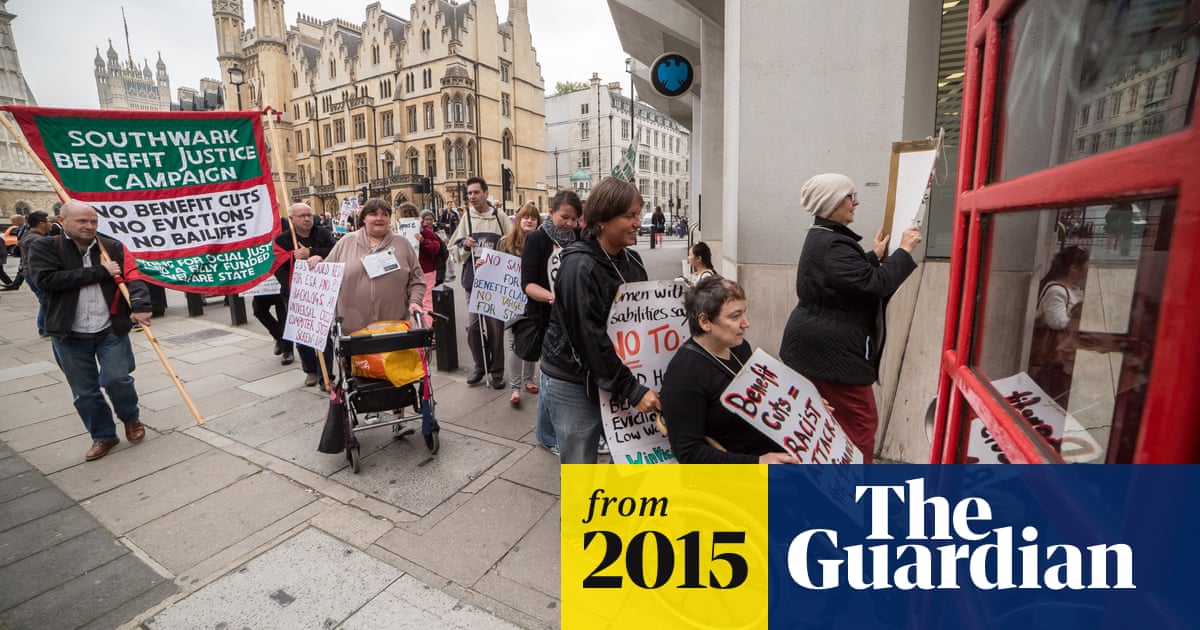 Thousands have died after being found fit for work, DWP figures show

Campaigners demand welfare overhaul after statistics reveal 2,380 people died between 2011 and 2014 shortly after being declared able to work

"More than 80 people a month are dying shortly after being declared “fit for work” according to new data, prompting campaigners to call for an overhaul of the government’s controversial welfare regime.

Statistics released by the Department for Work and Pensions on Thursday show that 2,380 people died between December 2011 and February 2014 shortly after a work capability assessment (WCA) found they were able to work".

Of course, these politicians are all the same, aren’t they?

And of course they release them at end of August, just before bank holiday weekend… this week and Christmas are the best times to release and bury bad news stories!

Thanks for posting it Whammel,